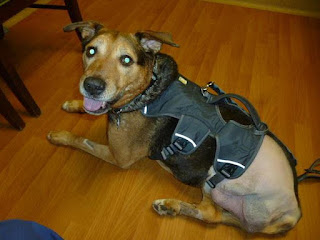 Bruno is a 10-year-old mixed breed dog who has been coming to NorthPaws since way back in 2006, so he's an old friend of ours. A few months ago, Bruno came in as an emergency when his family noticed that he had suddenly started limping. We were all saddened when tests showed that Bruno’s limping was caused by cancer in his left hind leg.

Shortly after being diagnosed, Bruno underwent surgery here at NorthPaws to have the leg amputated and effectively remove the cancer. After just two weeks, Bruno came back to see us to have his sutures removed from his surgical incision and Laura, one of our technicians, snapped this picture of him smiling up at her during his appointment. Bruno’s mom says that he’s doing AMAZING since his surgery, and Laura can vouch for that, as she says she couldn’t keep up with him when she was walking him on his leash. He’s the sweetest boy and we’re so happy he’s doing well!
Posted by NorthPaws & WestPaws Veterinary Centers at 9:20 AM No comments: